I still have 4 loads of laundry probably 5 by Wednesday when I realized that is the slowest day at the laundry and that is when my new laundry day will be.

I had a scare the other day. I remember washing mama’s quilt and putting it in the dryer. I had to be at the laundry first thing at 8 am the next day to be sure of getting it back.

They closed it at 5 PM and I had a few things including the quilt left in the dryer.

Because I have had my good under clothes and good sheets and towels stolen I have to keep an eagle eye out and check several times.

They are not open on the weekends now since that is when the thieves hit, the office is closed and they would come in with found cards and use the facility.

Anyways, after 4 hours of laundry the other day I came in and laid down. I have been so tired since the time change this year and seem to want to sleep more. When I refuse my body that wish I seem to be more forgetful.

I was laying there and thought about the quilt. I went and checked the laundry cart with wheels that I had parked in the living room. It was not there.

The dried clothes from the previous days wash were there, including the blanket Victoria made me last year. It was one regular Pissy Pants China load and the big washer load of just mama’s quilt. I used two dryers.

I came in here and with a sinking heart checked the closet and there it was !

Seems China likes Mama’s quilt so much. Every time I put it on the bed all freshly washed she decides it’s her favorite PEE spot. 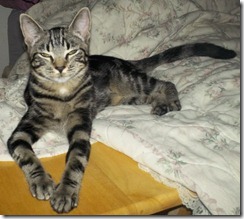 I do not remember carrying the quilt back here and putting it in the closet. I would have had to have carried it solitary; and think it so odd that memory is lost.

All the rest of the clothes that I had just finished were also there.

It’s like my body was so tired I completely phased out walking back here with a HUGE quilt in my arms ???

Seriously, I am still not used to this latest time change. It has effected me very differently this year.

I made cyngetti last night. Rhea bought garlic and Texas Toast and we added garlic to the toast. I found the spaghetti sauce I made from scratch to be a tad runny and not thick like I had wished.

It was the best yet; as it should be~ because after all it is the Last.

I have noticed since I finally got into “The Walking Dead” and American Horror Story (Asylum) my dreams have totally taken on a new and disturbing turn.

My bro solo in the mountains, oh wait Zombies

Scott and his Mother will cook Thanksgiving together. He is making a Ham and since his recipe sounds so Paradise Ham familiar like mine, I said “Good Deal”

I will just make the 2 Sweet Potato pies and Rhea is making her specialty Green Bean Casserole. She uses Cr of Chicken, and Cr of Mushroom soup together. It tastes really good, different from most person’s recipe for it 🙂

A precooked Spiral ham is awesome on the grill

Before baking ham, place pineapple slices on ham with toothpicks and place cherries in center of pineapple.

Do not buy Glaze in a jar…make your own sweetness

In a medium microwave safe bowl combine brown sugar and reserved pineapple juice. Mix together and microwave for about 5 minutes, until mixture is thick. Pour some of this glaze over the ham about every 15 minutes in the last hour of baking, until all is used.

After heating in the oven then you can place it on the grill and continue basting for a great flavor explosion.

Roast some brown sugar and buttered squash in place of sweet potatoes for a change-up.

What kind of Tator are you ?

1 can  Campbell’s Cream of Mushroom Soup

How to Make It

My cats Beethoven CD messed up so I need to burn another one.

It relaxes my gurls 🙂